Man! Has anyone else noticed that board games have fantastic art and components these days?

It used to be that when I saw a game with great art, I would instantly look into it in more detail. Now it seems liked at least half the games released are just fantastic looking. If I researched every eye catching game in my Twitter feed, then I wouldn't have any time left to write you these emails.

This is where some of you old timers start to grumble. "Back in my day, the focus used to be on gameplay. Not all this froufrou. Just give me a solid game. You need to appreciate the classics."

But those curmudgeons might be on to something. Make new friends, but keep the old. Let's not forget great games just because they aren't new.

It can be hard to play the great games of yesteryear. Some of those older games were only produced in small print runs, or they were only released in Germany. And when you do track down a copy you will often find that the art, design, token thickness, etc isn't exactly up to today's standards.

I'm excited to get a chance to modernize/refresh a game that I consider to be one of these classics, and bring it to a wider audience. Monday we will be launching a Kickstarter for Bites.

Big Points was the clever little, commodity speculation, shared incentives game that I loved to teach new people. Because of its length (only 20 minutes) some of you would call it a "filler". If by filler you mean smart, interactive, quality, short game that you can play between other games, then call it a filler. If you mean a time-waster or something that doesn't require thought, then I think you misspoke. If you must use that term, can we at least call it a "super filler"? 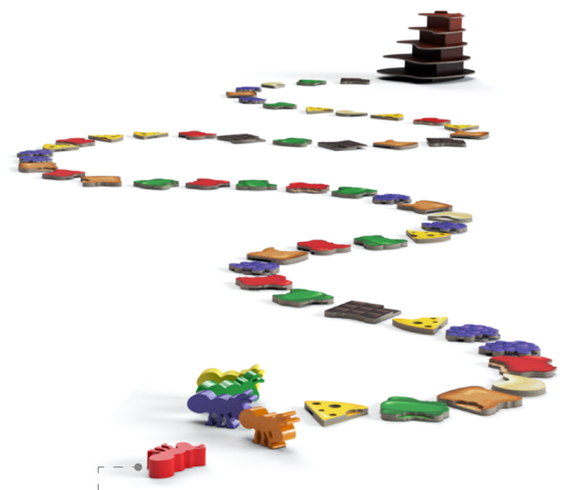 But it isn't just about looks. We are also adding to the gameplay and replayability. More on that Monday when the Kickstarter launches.